So, I want to share with you something that just happened. After dropping my daughter off at school, I ran over to Scheels to buy a new North Face winter coat, because I needed a new one, and bumped into a guy I know who has come to some of our workshops. He’s come to our BGS Live ecommerce event and has a store, and I just happened to bump into him.

We started chit-chatting and I said, “How’s your store doing?” He said, “Oh, we’re doing good, but you know, I just really need to get more traffic … because we’re making sales, and if I could just get some more traffic to my site, I’m gonna be doing a lot better.”

Me: “How much traffic are you getting right now?”

Me: “Are those unique visitors?”

Me: “OK, how are you getting that traffic?”

Me: “Cool, and what’s your conversion rate?”

Then I took a look at his store on my cell phone and there were pop-ups all over the place. It was just a mess. A typical ecommerce store. Your typical Shopify store—not designed to really convert the sale.

But you know, he’s not alone in this. Everybody seems to think that they need more visitors, more traffic, to make more money.

Starvation means that your business would die of starvation if it wasn’t getting any traffic, wasn’t getting customers. That’s not the problem. The problem is you can’t convert it. You can’t “digest” that traffic on your site and turn it into sales. And that’s your problem.

In a perfect world, it’s one click. They see the ad, they click on it. That’s one click … You get ‘em to the site. But once they hit the site, there are six to eight clicks, at a minimum, if nothing goes wrong before they complete the purchase. Yet, everybody, including this guy, is so focused on optimizing that “one” click—the traffic click.

But what about everything else? What about the other six to eight clicks that have to happen from the time they hit your store to the time they complete a checkout and give you money?

Why are you not spending any time optimizing those clicks? That’s the big deal.

So, I told him, “Dude … I would stop trying to get better at traffic right now. Don’t get more visitors. Figure out how to use the visitors that you’re getting to make more money. Maximize the money you’re making from your traffic.”

This is the number one thing that we focus on at Build Grow Scale. It’s a process called Revenue Optimization™, and our goal and focus is to figure out how to maximize the money we can make from the traffic a store is already getting before we go get more traffic. OK? Because as you grow a business, traffic only gets more expensive. It doesn’t get cheaper—never gets cheaper. It only gets more expensive as you cast a wider and wider net to reach your wider and wider audience. And you have to do that if you want to scale. But, if your store is converting so poorly that out of every 100 visitors, you’re making one sale. And if you have a normal store’s average order value (like in the $30, $40, $50, and even $100 average order value range), it’s going to be almost impossible for you to cashflow a business and scale it. Actually, it’s nearly impossible without outside funds, investor funds, or something like that, to offset the fact that you can’t run a profitable business.

So, I told this guy, “Focus on your store. You came to our event, you already know what to do, we’ve already told you this before. The problem, again, is not your store. You don’t need more traffic, you have 10,000 visitors” … which probably cost him almost $1 a click or more. And yet, he’s not making money because he’s spending $1 per click and only converting a hundred out of those 10,000 clicks.

He needs to turn around, keep doing his traffic (yeah, you gotta keep buying traffic), but stop trying to get better traffic or scale traffic. Just simplify it and focus on building the store out so it’s actually available and able to capture that traffic at a high rate (higher conversion rate, higher average order rate, higher repeat customer rate) using your abandoned cart sequences, lowering your bounce rate, and all the traditional optimization stuff that needs to happen.

He’s already getting traffic. He’s figured out traffic that does convert, it just doesn’t convert that well. So, maybe we take it from one percent to two percent so he’s getting two out of a hundred. And then we go from two to three.

People think that that’s ridiculous or hard to do—it’s not. In our Ecom Insider program, our baseline conversion rates on most of the 600 stores in there starts around four percent. We have stores in the six, seven, and eight percent range.

And then, when you count in recovery, repurchase, bringing customers back, and your email follow-up, etc., you can really really really boost your conversion rates massively … to where you can actually profit significantly from traffic that before may not have been that profitable to you. Because, again, the traffic’s not the problem. And you’re probably already better at traffic than you need to be. This guy certainly is. You probably are as well.

So, the moral of the story is this: Pay attention to your store, and optimize those six to eight clicks instead of just focusing on that “one” traffic click.

And remember, guys: Most stores, most businesses, die from indigestion … not starvation. Think about that. Think about how your store is doing and how you can make it do better. 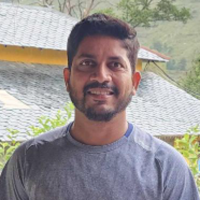