Optimized Ecommerce EP 024 – How to Do Persuasive Copy in Ecommerce

In today’s episode of The Optimized Ecommerce Podcast, Bret Thomson joins Tanner Larsson to talk about applying traditional direct response copywriting skills to e-commerce. In this episode, you will learn all about how to do persuasive copy in the ecommerce space and what makes ecommerce copy different. So dive in this week’s episode

Welcome to Episode #24 of Optimized Ecommerce – How to Do Persuasive Copy in Ecommerce. I am your host, Tanner Larsson, CEO of BGS.

Bret is one of the most phenomenal copywriters in the game! What is even more special about him though is that he has taken his traditional direct response copywriting skills and applied them 100% to ecommerce. He has pioneered some of today’s ecommerce copywriting techniques.

“Awakening the Giant Within”

We kick off today’s episode by talking about how Bret Thomson became one of the top ecommerce copywriters on the planet.

More than anything, Bret’s story gives a lot of people hope. As a kid, he was not very interested in his English classes — he hated writing and was not an avid reader (except for magazines and the occasional choose your own adventure stories).

By his early 20s Bret was going through a party phase when he met a person who owned a nightclub who loved to read. He thought it was a strange thing to own a lot of books and spend so much time reading outside of school.

Bret was invited to the nightclub owner’s library and one book caught his attention, “Awakening The Giant Within”.

Reading that book transformed Bret Thomson, “Wow, I didn’t know you can actually create your own destiny. I was in my early 20s and didn’t have a life or a big, ambitious entrepreneurial career before then. This led me on a path of self development and self education.”

Bret Thomson went ahead and started his own business, running a personal development workshop for kids. Everybody thought it was going to be a fantastic idea, so Bret went ahead and worked alone. Little did he know that not knowing about marketing can cost a business owner a lot of money. And that is exactly what happened to Bret.

He ended up in him attending a wealth creation seminar by a person known as the millionaire maker of Australia who said, “I’m going to show you more money than anything I’ve ever done in my whole entire life.”

Bret remembers thinking, “Right, whatever comes out of this guy’s mouth, I’m just going to do it.”

To his surprise, the speaker on stage said, “Copywriting.”

“No! I didn’t even grow up reading or writing a lot!”

But this did not quell Bret’s determination. He dove in and started to practice copywriting anyway.

He recalls, “I believe the reason why I got very good very fast is because a lot of people have to unlearn some of the English stuff that gets drummed into us at school. Because I slept through school, this was my first education on how to write. One of the big principles I’ll say a lot through this podcast is to write as you speak.”

Having the permission to write very conversationally was like a breath of fresh air for Bret.

The past 14 years have been a crazy journey for Bret Thomson. Today he is 100% into ecommerce copywriting and working with only the best in the ecommerce industry.

The hunger for learning motivated Bret to consume all the best as much as he possibly could.

He said, “People tell you that you have to do your 10,000 hours. So, I burned through that really quickly and I started emulating some of the greatest copywriters.”

Bret was studying copies by legends like Gary Halbert and Dan Kennedy. The conversational connectors that Gary Halbert would sprinkle throughout the copy fascinated Bret.

Another thing he did differently was reading almost exclusively just personal development books. During his readings he came across one author who was an incredible storyteller, Og Mandino who wrote “The Greatest Salesman in the World.” Og has 11 books and Bret has read all of them.

This inspired Bret to nurture his talent for storytelling which was already developed during his time having fun in the Australian party and pub scene during his early 20s.

Bret goes on to add, “There is nothing glamorous about becoming a master at copywriting. There is simply a deep hunger for learning, diving into the trenches, and developing your talent for storytelling while keeping in mind some of the principles when it comes to copywriting.”

How To Stay Connected With Bret Thomson

Want to stay connected with Bret? Please check out his social profiles below.

Also, Bret mentioned these books on the show. You can find that on:

Want us to do an Audit on your e-commerce store and show you how you can make some quick changes that will dramatically increase sales and profits without increasing your traffic? 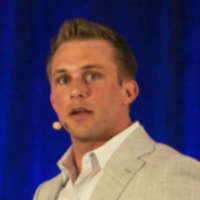 Studly Husband, Super Dad and serial entrepreneur. Tanner is also the Founder of 80/20 Media an ecommerce incubator and the CEO of BuildGrowScale.com.

Want us to do an Audit on your e-commerce store and show you how you can make some quick changes that will dramatically increase sales and profits without increasing your traffic?